In 2018, Blanca Regina released her first solo album, a series of duets with a wide range of talented musicians, co-produced with Steve Beresford. Elrington, track 4 on the record, features a duo of Beresford and Regina.

These artists already share a history of 8 years playing together and organising events through Unpredictable Series.  So it was only natural that they decided to make a full record together. Blanca Regina having been awarded the Francis Chagrin Award by Sound and Music, they went back to Wilton Way Studio in the heart of Hackney, London at the end of 2019. In one day they recorded ‘What Blue’ a spontaneous music work recorded by Syd Kemp and later mixed and mastered by Dave Hunt. The album has 7 tracks. The variety of sounds and noise in the record was made possible by the wide range of instruments and keyboards at the studio.

‘ Piano players have one big advantage and one big, related, disadvantage.

The big plus is that, unlike nearly all other instrumentalists, piano players don’t have any instrument schlepping to do. The instrument is in the venue waiting for you. The big minus is that the instrument might be horrible.

You can hear, for instance, recordings of Cecil Taylor, Thelonious Monk and Paul Bley extracting wonderful music from instruments many would reject instantly.

This perpetual situation has, I think, produced an interesting mindset in those piano players not famous enough to have a man accompanying them on tour with an immaculate Joanna in the back of his truck.

Confronted with a dodgy piano, we do what we can. And this approach can be applied, I think, to a situation like walking into Wilton Way studios and seeing a large number of keyboards, many of which you are unfamiliar with. You do what you can.

To be accurate, there was one keyboard I did know about – the Farfisa VIP500 – because it had belonged to The Slits – a popular group which I played with and who split up in the early ‘80s.  It’s been living at Wilton Way for a while. I chose not to play it on this occasion because there were so many keyboards there I had never played.

I loved playing all the keyboards so much that I forgot to write down what they were. So we consulted Pierre’s photos and managed to work out most of them.’

Steve Beresford has been a central figure in the British and international spontaneous music scenes for over forty years, freely improvising on the piano, electronics and other things with people like Derek Bailey, Evan Parker, Han Bennink, John Zorn and Alterations (with David Toop, Terry Day and Peter Cusack).

He has written songs, written for large and small ensembles, and scored short films, feature films, TV shows and commercials. He was part of the editorial teams of Musics and Collusion magazines, writes about music in various contexts and was a senior lecturer in music at the University of Westminster. With Blanca Regina, he is part of Unpredictable Series, which produces events and sound and video recordings of experimental music and art. 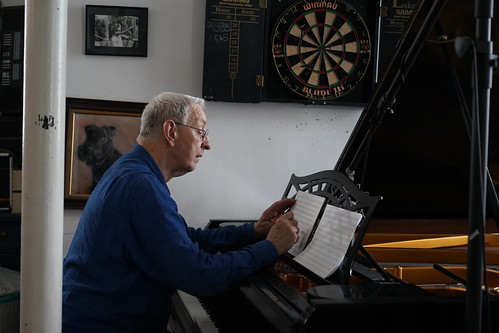